An Introduction To Off-Grid: Part 2 - Solar Principles and Applications

Here, I will focus this and various subsequent posts on solar energy as this is the most common and least site-specific renewable resource, meaning it is the most widely available and most commonly understood concept of renewable energy to the beginner, and the most used globally.

Lets discuss sunlight for a second. According to;

https://earthobservatory.nasa.gov/features/EnergyBalance/page2.php ,"The surface of the Sun has a temperature of about 5,800 Kelvin (about 5,500 degrees Celsius, or about 10,000 degrees Fahrenheit). At that temperature, most of the energy the Sun radiates is visible and near-infrared light. At Earth’s average distance from the Sun (about 150 million kilometers), the average intensity of solar energy reaching the top of the atmosphere directly facing the Sun is about 1,360 watts per square meter, according to measurements made by the most recent NASA satellite missions."

Unless you are in the arctic, you receive a consistent amount of sunlight each year. Some areas get more than others. Rainy areas like Seattle, Washington receive less than sunny Arizona and Florida. Most areas in the United States receive adequate sunlight for solar power unless you are in Alaska where you have months of darkness. Even rainy states can be off-grid and use solar as long as they plan accordingly and have adequate storage (usually in the form of batteries to carry them through those rainy days and weeks.

The visible light spectrum is what we usually think of when we think of solar. This is what makes solar panels or photovoltaics (photo meaning light, volt meaning energy) do their thing.

The visible light spectrum mainly powers the "Photovoltaic effect" which is what makes solar electricity possible. When sunlight hits the cells, it releases electrons from one side of the cell, and they cycle through the wires to be used by us for our energy use. Essentially, silicon (the material solar cells are mostly made of) are merged with different elements to make one side positively charged, and the other negatively charged. The sun does the rest of the work in making this adapted for our use.

Each solar cell has soldered wire that collects these "freed" electrons from the silicon and channels them. One cell doesn't make much power, but when you start stringing them together in series and parallel, you can raise the volts and amps.

I describe volts and amps to people in plumbing terminology. Even if you are not a plummer, you have seen pipes and dealt with their end connections, a faucet.

Think of volts as the pressure in the pipe. When you have low pressure, the water comes out in a trickle and gives you a very dissatisfying shower. With high pressure, the water sprays out with force like a burst fire hydrant spraying out into the street, quickly flooding it. You effect this pressure by lining up more power sources in a row or more cells or panels, therefore making a faster burst of electricity. Your car battery puts out 12 volts DC, where your house most likely runs about 120 volts AC to the plug-in outlets. Some devices need much more of this "electrical pressure" and run on 240 volt outlets. A dryer and stove top are a few of these such devices.

The diagram below shows how these relatively low-energy producing cells are combined into panels, and the panels into solar arrays to increase the amps and volts to a size to provide for our needs. The beauty of these systems is they are so modular. Need more energy, just combine in more panels. The part that makes this a bit more complicated is the "balance of system" components.

"Balance of system" is a term for all the different components that make that solar systems really useful. Solar produces DC power; so if you want AC you have to change the nature of it, and that's where an inverter comes in.

If you want to charge batteries, you need a charge controller to make sure that they don't overcharge and divert or cut off that flow of energy.

Batteries store the energy for a time when the panels are not making power for you to then use and draw from. Those panels don't always produce in accordance with your busy schedule. They also let you charge and transport that stored power somewhere else.

Conductors, cabling or wires carry those electrons around to the different system parts like your blood vessels.

There are different technologies within this category of solar, and we will delve into those in a later blog.

The other form of energy that we can use comes mostly from the infrared spectrum, which cannot be seen to the naked eye. This is the invisible forms of the light spectrum which constitute heat.

Heat can power a process called solar thermal where we can use the heat produced by the sun in two different methods;

1.) Water heating for direct use

In domestic water heating, we use different combinations of methods and technologies depending on the specific climate variables in the region, and what it is we are trying to heat.

For example if you are heating a pool and extending out the seasons you can use it, you do not most likely want to heat it to hot shower temperatures and it would be a complete waste of materials to use expensive components like copper and aluminum for a system such as this. You do not need to insulate the collector because most people do not swim in the winter, where the sun intensity would be inadequate for such a use anyway.

You would go with a inexpensive rubber or plastic collector that goes directly into the pool you will be heating.

Another scenario is designing a system for Florida and one for New England. In Florida it never reaches freezing, where in New England, the winters can be brutal and have many weeks of subzero temperatures. In Florida, you can put a modified water heater tank on the roof painted black (called a batch collector) and directly heat the water.

This would not fare so well in New England. It may work for the summer, but as soon as temperatures dropped below zero, the tank would freeze and you would have some serious problems!!!! This system actually shows a solar pool heating system on the bottom, and solar electric (photovoltaic) system above it. You can see the simplicity and exposure of the pool system. It has no insullation, so it would not retain heat well in the winter and very cool months. It is made of simple, relatively cheap components, because that's all it needs to raise the temperature of the pool a it in slightly cooler months

So there are pool heating systems which consist of a black, rubbery membrane that water is pumped through, heated and then returned to the pool, and there are domestic water heating systems where you need higher temperatures year round for daily processes like showers, washing hands, laundry, and radiators (nowadays usually in the form of radiant floor heating). 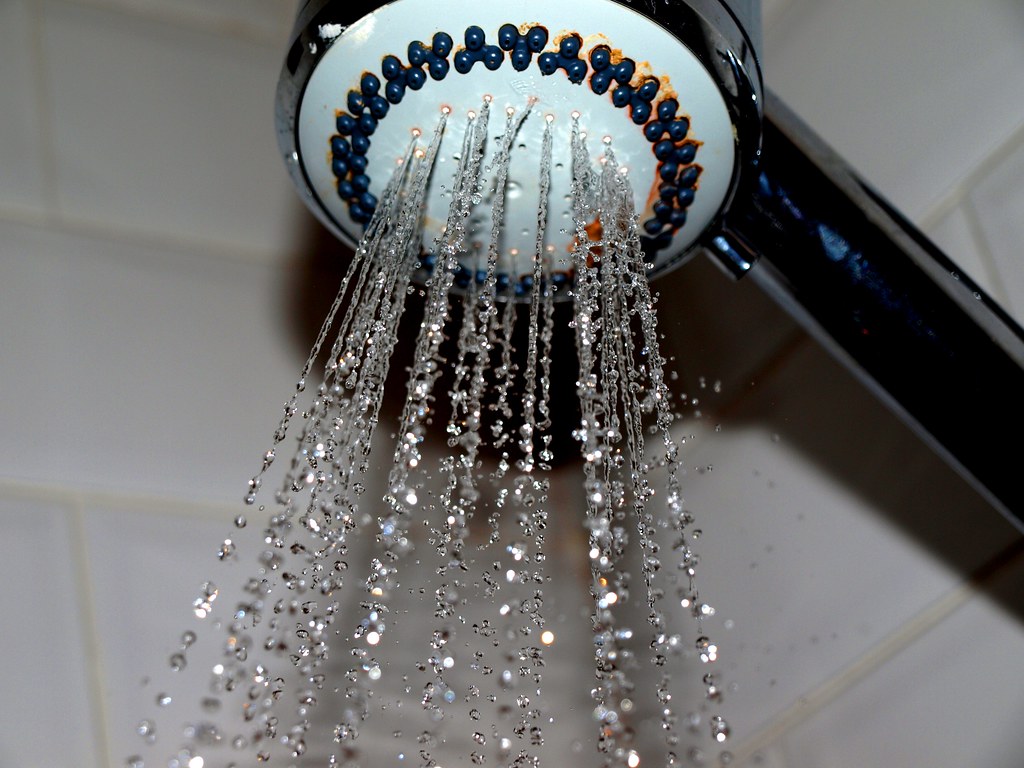 Domestic use can be utilized in two main designs:

This system is composed of a tank (usually painted black) directly mounted on the roof to absorb sunlight, heat the water, store it and gravity-feed it down to the house.

simple, cheap, directly heats the water with no antifreeze needed, no losses through heat exchange process.

you should not use in cold (freezing climates), roof needs adequate support to store all of the water needed in storage tank, all of the major components are on the roof, so difficult service access. 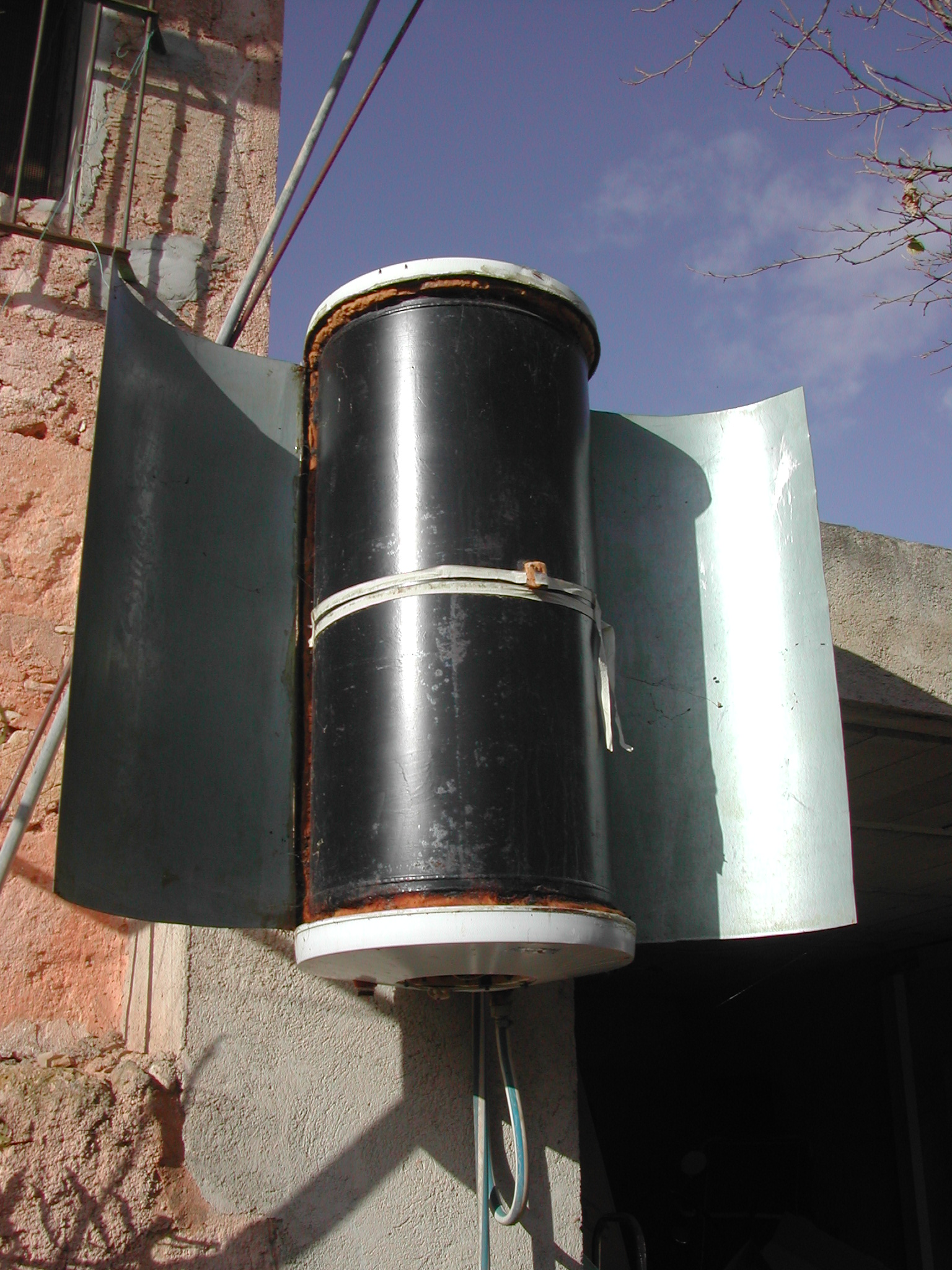 These systems have a solar collector on the roof, but it stores a small amount of water. A pump circulates the water as it heats into the tank (which is now mounted within the building). The piping in pressurized and the water in the system is mixed with food-grade antifreeze (propylene glycol) which is circulated into a heat exchanger inside of the water tank. The heat from the enclosed glycol loop is exchanged with the water that will actually be used by the building occupants.

Protected from freezing, older, highly tested system, puts out heat making it ideal for areas with lots of snow as it will melt the snow itself, easy to clean, not highly fragile, no vacuum gaskets that can fail, efficient, stores the tank in the house.

Most effective when sun hits it directly (less effective when sun is low in the sky), heavy panels can be challenging to get up to roof (need multiple people and secure method of hauling panel up), mechanical pump and other parts can fail and need replacing, needs proper installation to not leak (to find leaks, apply soap to joints and look for bubbles), more expensive than batch, glycol breaks down eventually and needs replacing, if you use the heat exchanger-in-tank system, expensive water tank needed that contains a heat exchanger. (There are systems now with a heat exchanger on the roof instead) 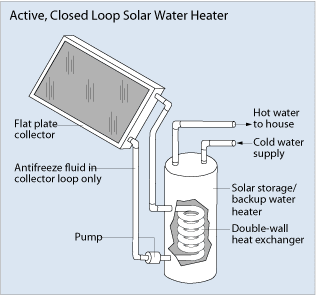 3.) Evacuated tube (heat pipes) - This is a newer type of system that has some cool advantages. It is composed of tubes that by their shape, can utilize more angles of the sun during the day optimally. They are easier to install with less help as they have a top manifold that all the tubes connect into, and all the tubes can be brought up to the roof separately and then assembled. They are vacuum sealed, so as long as they hold a vacuum, they are super insulated.

Cons- fragile tubes, insulates "too well" in areas with snow so the snow won't melt off them automatically, vacuum seal can go out, then it is not very effective. More complex and expensive than batch. 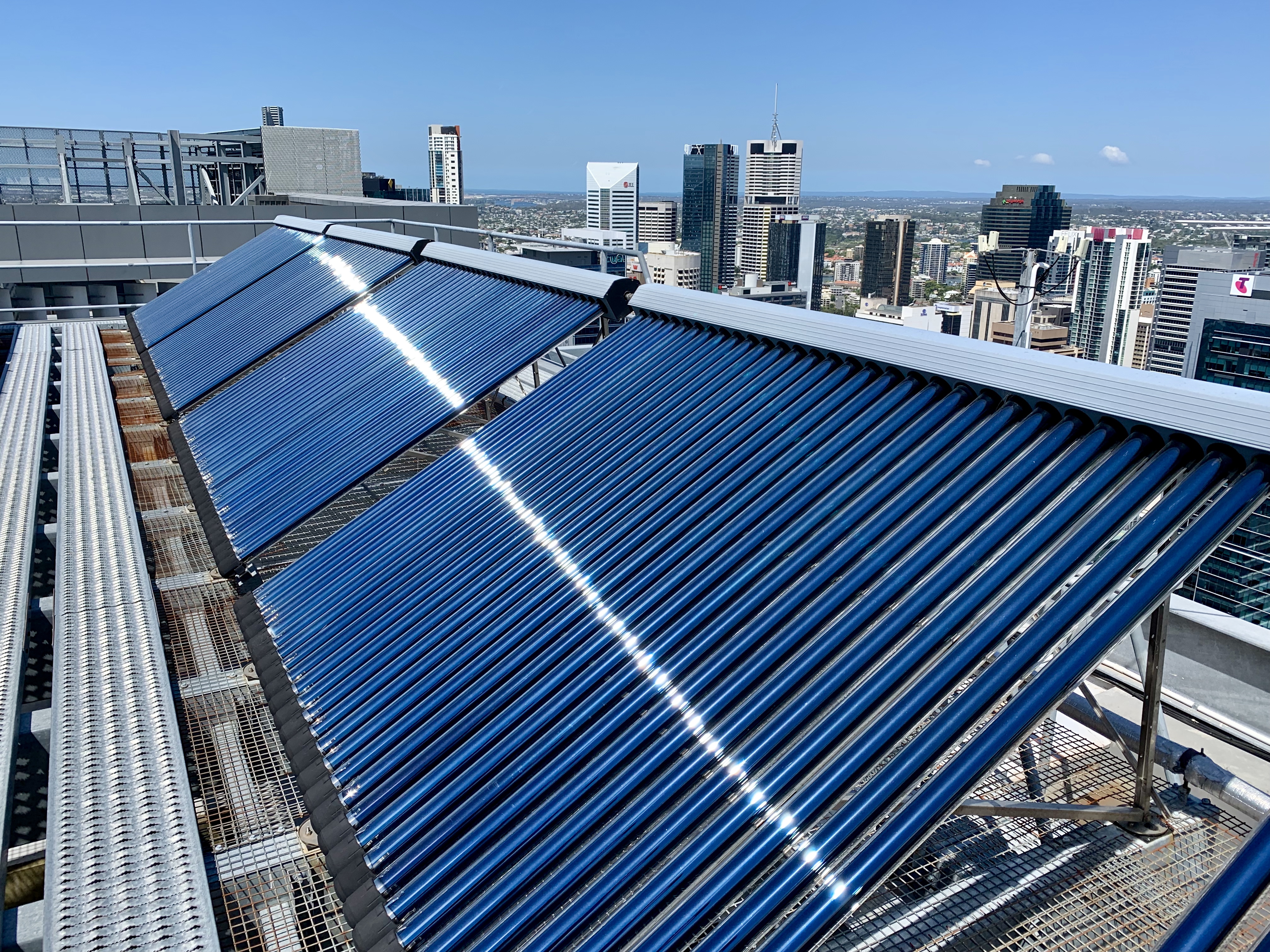 You are not very likely to use concentrated solat at your house unless you are building a solar cooker or other DIY project, it is mostly used in industrial processes like electricity generation on a large scale and it involves a climate with mostly direct sunlight, whereas these previous technologies still are effective when it is cloudy. (Photovoltaics can make energy from sunlight coming through the clouds, though it will be less.)

There is even a process that creates "solar winds" or "updrafts from heated air through a chimney to drive turbines. I am really just mentioning these so you know and they are very interesting, you will most likely not use any of this in your home energy solutions. 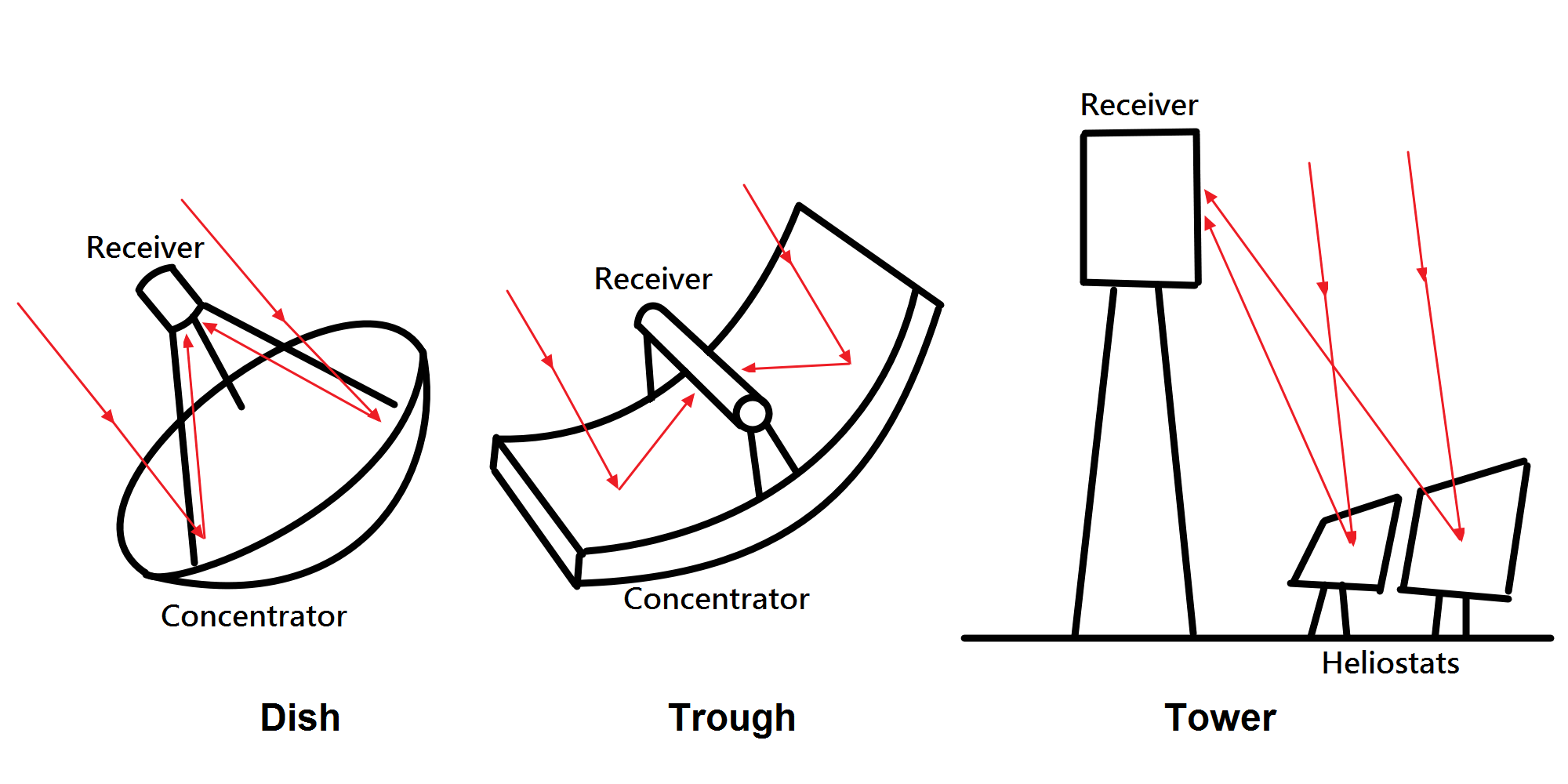 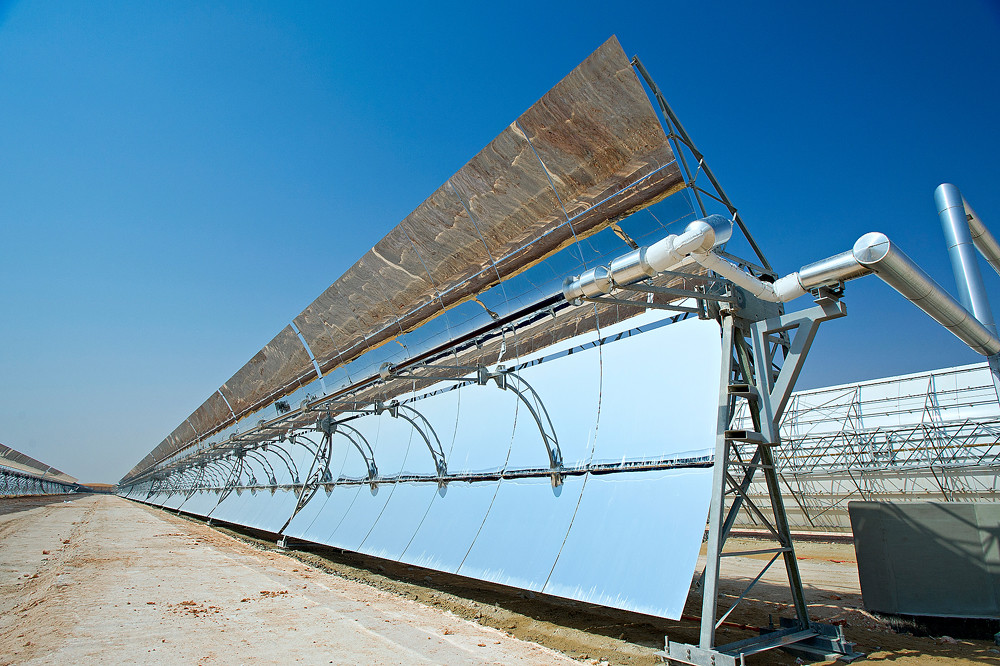 Thanks for reading our WiBuy Blog! We hope this is helpful to you in your journey to energy independence. We seek to be content producers as well as supplying the best in off-grid and renewable energy products. Please FOLLOW us on facebook and instagram @wibuyenergy , SUBSCRIBE to our youtube channel wibuyenergy for fun videos, projects, and interviews and check us out on the web @ wibuyenergy.com